Top TikTok Slang Words And Phrases You Need To Know

TikTok has been exploded in the past years. On this platform, Gen Zers have created a new set of slang and vocabulary that can be confusing for those who speak English as a second or even mother tongue language. Don’t worry! We are here to enlighten you. Check out the list of common TikTok slang and its meaning.

POV is in short of “Point Of View”. A “Point Of View” style video refers to a trend in which the video shows the viewer’s point of view of a certain situation.

FVP is the abbreviation of “For You Page”. You probably have seen #FYP everywhere on TikTok. As the name suggests, the content creator uses hashtag #fyp or #foryoupage to make their videos show up on your homepage based on your personal algorithm, thereby getting more views.

The “CEO of” comment trend is starting to appear on TikTok. In real life, CEO means “Chief Executive Officer”. On TikTok, to be called CEO of something means that you are best at it.

For example, on a well-edited video, you will see comments like “CEO of editing” “CEO of transitioning” “CEO of viral videos” and so much more, you get the idea.

OOMF stands for “One of my friends” or “One of my followers”. According to Urban Dictionary, OOMF is often used negatively to talk about people behind their backs.

TikTok users have added many new words to Urban Dictionary. There is a new term that has been going viral in the past year: Heather. Until 2021, there are over 2.2B views on this hashtag.

Heather was created by Conan Gray, a popular song on TikTok. Conan sings about the all-too-common scenario in which the person you have a crush on has a crush on someone else in the song.

Urban Dictionary defines the term as “When someone says that you are Heather, they mean that everyone can’t help but like you.” 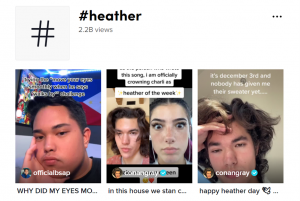 What does it mean to shadowban someone?

This phrase “shadowban” has become more viral on TikTok and other social media channels. Being banned from a social media platform, in a way that your content is invisible to everyone, can’t show up in a #FYP and therefore your visibility has been greatly reduced.

This term refers to people or objects that were a bit out of touch with current trends. It is the opposite of being trendy.

“Go Little Rockstar” is one of the most wholesome trends on TikTok where people celebrate achievements of many kinds or even just memorialize lost loved ones. 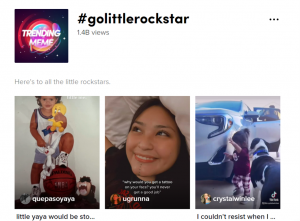 Your Dictionary defines “Pick Me Girl” as a woman who claims or acts as if she is unlike most other women, to gain attention from men.

Pick me girl also becomes a controversial topic to discuss. Some people think “Pick Me Girls” attack and criticize women to increase their appeal, while others shame them and needlessly target others for seeking male attention.

Overall, there will be more “Internet language” that will rise in popularity as the result of more and more users joining TikTok every day.

>>> Read this article to learn more about British slang.